Put the chops in the frying pan and cover with water.
Let gild each side. Thaw the frying pan with white wine and add CODAL green peppercorns.
Let have a turn of bubble and serve with stewed chayottes.

Cut lobsters in two pieces, still quite warm.
Coat them with the following cream, obtained by putting in your mixer : a soupspoon of CODAL green peppercorn , the juice of 1 lemon, a little mustard and a lot of fresh cream.

Close
THERE ARE TWO KINDS OF NOSY-BE SAUCES

THERE ARE TWO KINDS OF NOSY-BE SAUCES, THE ONE WARM AND THE OTHER COLD.

This sauce is very easy to prepare : The warm one is only used with the cooked fish in the court-bouillon, is that the served fish such which and the sauce aside; or that the fish coated by this sauce, was maintained in the oven some moments before serving.

Nosy Be cold Sauce
The cold sauce is Make a bechamel sauce with a little fish broth and add to this bechamel sauce some spoons of crushed CODAL green peppercorn and mix with thick fresh cream then bind with an egg yolk.

Terrine of duck with green peppercorn

To proceed as you are accustomed to doing it for a poultry pot. After having boned duck, put the flesh to marinade during approximately 24 hours with a glass of Madeira, some cloves and a little grated nutmeg. Keep aside a few pieces of duck, aglets and a few pieces of the thigh, and chop the rest of flesh.

In this mince, add an equal weight of thin bacon or rather fatty pig and approximately 50g of CODAL green peppercorn. Mix closely so that the peppercorns are uniformly distributed in the beforehand salted forcemeat.
Furnish a pot with fine bacon bards and to distribute a layer of mince.

SOME RECIPES WITH THE GREEN PEPPER :

CODAL suggests some recipes with the green pepper

Green peppercorn has a perfume that does not have any more dry pepper and its strength is much less large.
It can thus be used to replace the dry pepper with other condiments but in more significant quantity.

It is always necessary to rinse the green pepper with large water before use.
If you do not have the immediate use of all the box, the remainder will be perfectly preserved well, for one month or more to the fridge, in a glass container with a slightly salted water. ! Mahazotoa ! Bon appetit ! 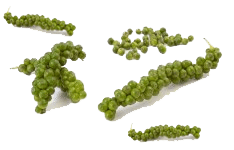